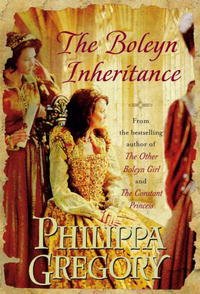 -THREE WOMEN WHO SHARE ONE FATE: THE BOLEYN INHERITANCE

She runs from her tiny country, her hateful mother, and her abusive brother to a throne whose last three occupants are dead. King Henry VIII, her new husband, instantly dislikes her. Without friends, family, or even an understanding of the language being spoken around her, she must literally save her neck in a court ruled by a deadly game of politics and the terror of an unpredictable and vengeful king. Her Boleyn Inheritance: accusations and false witnesses.

She catches the king's eye within moments of arriving at court, setting in motion the dreadful machine of politics, intrigue, and treason that she does not understand. She only knows that she is beautiful, that men desire her, that she is young and in love -- but not with the diseased old man who made her queen, beds her night after night, and killed her cousin Anne. Her Boleyn Inheritance: the threat of the axe.

She is the Boleyn girl whose testimony sent her husband and sister-in-law to their deaths. She is the trusted friend of two threatened queens, the perfectly loyal spy for her uncle, the Duke of Norfolk, and a canny survivor in the murderous court of a most dangerous king. Throughout Europe, her name is a byword for malice, jealousy, and twisted lust. Her Boleyn Inheritance: a fortune and a title, in exchange for her soul.

The Boleyn Inheritance is a novel drawn tight as a lute string about a court ruled by the gallows and three women whose positions brought them wealth, admiration, and power as well as deceit, betrayal, and terror. Once again, Philippa Gregory has brought a vanished world to life -- the whisper of a silk skirt on a stone stair, the yellow glow of candlelight illuminating a hastily written note, the murmurs of the crowd gathering on Tower Green below the newly built scaffold. In The Boleyn Inheritance Gregory is at her intelligent and page-turning best.